Another Successful REVO Study Tour for The Lexicon Bracknell 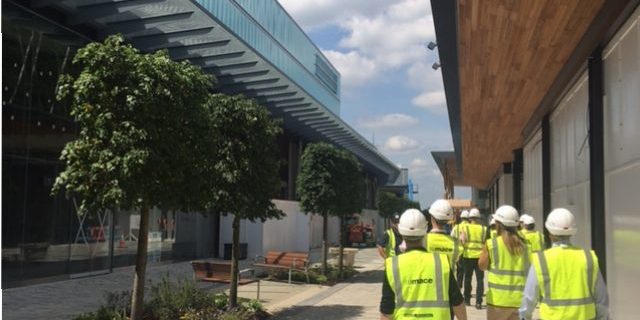 Coverdale Barclay worked with Revo to deliver a 2nd successful study tour of The Lexicon Bracknell. Revo returned to The Lexicon due to popular demand. The event was attended by almost 50 property professionals, who were given the chance to tour the new scheme ahead of the launch on 7th September 2017.

Delegates heard from Simon Russian and Richard Poyser of Legal & General, Victor Nicholls of Bracknell Forest Council and Garry Wilding of BDP, the architect behind the scheme. Each explained the long process, over many years, behind getting the project to where it is today, less than 3 months away from opening.

Located on the 13th floor of Ocean House, the marketing suite provided panoramic views over the site providing a real sense of the scale of the development and the progress that has been made to date.

Delegates were given a tour of the 1 million sq. ft. site of which 580,000 sq. ft. will provide new retail, restaurant and leisure space. Pre-let by over 75% The Lexicon will be home to the first new-build, full-line Fenwick to be opened in 11 years, and has attracted top fashion brands such as Topshop, Topman, Marks & Spencer, Next, H&M, River Island and Primark. The town centre’s evening offer will be transformed with the opening of a 12 screen Cineworld and 10 casual dining restaurants, such as Nando’s, wagamama, Gourmet Burger Kitchen and Chimichanga.

The study tour attendees were also able to take a virtual tour of Bracknell’s future new town centre as it will be on completion via a pair of 3D virtual reality goggles.