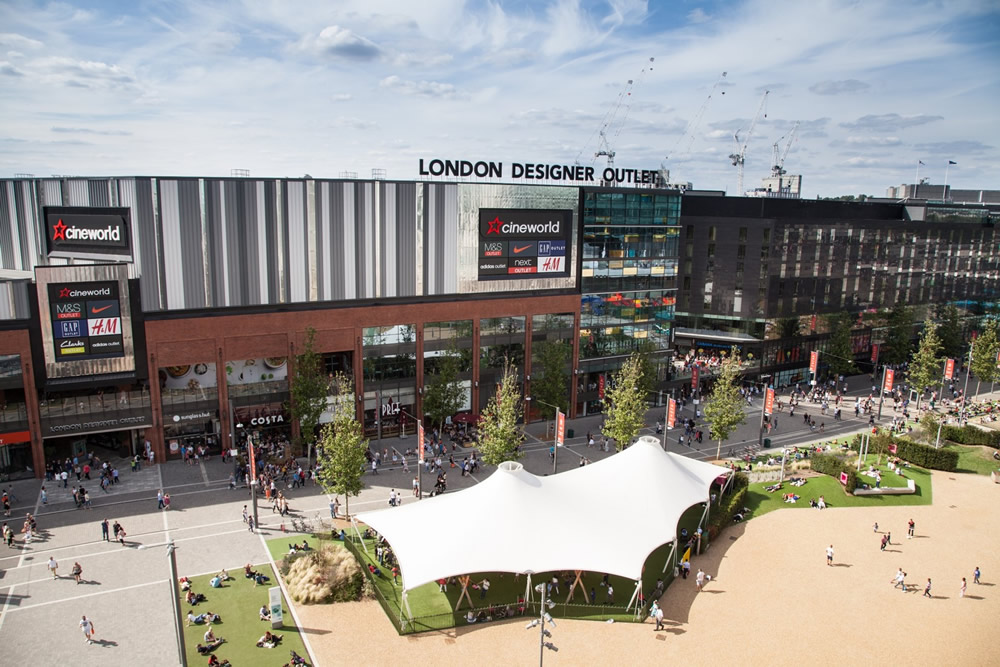 LDO, London’s only fashion & lifestyle outlet centre, has signed more top names to add to its impressive list of aspirational and desirable brands. Hamleys – with its first outlet store in London -Raging Bull and Cowshed are to open at LDO, while Lost Rivers Brewing Co. and Sugar Dumplin Caribbean BBQ & Bar are joining the wide line-up of bars and restaurants.

London Designer Outlet (LDO) was ranked 5th best performing outlet in Europe and the 2nd best in the UK in 2015. Its 265,000 sq ft of retail and leisure space includes 70 outlet stores and restaurants, a nine-screen Cineworld and a large children’s play park. LDO has a proven track record, and significantly out-performs industry average footfall and trading figures.

Located right next to the world famous Wembley Stadium connected by EE and The SSE Arena, Wembley, LDO has projected footfall of 7.0 million for the current year. Just 20 minutes by London Underground from the West End, LDO is a premium retail & leisure destination, with the appeal of major retail brands, a choice of popular restaurants and bars, and a range of experiential events, with the added bonus of serious, year-round discounts.

Hamleys, one of the world’s best-known retailers of toys, is to open a 1,330 sq ft store at LDO. This will be the company’s second store within the M25 after its renowned Regent Street flagship, the oldest toy shop in the world, which traces its history back to 1760. The new store at LDO will feature the Retail Theatre experience that customers expect, with plenty of live demonstrations, games and magic.

Gudjon Reynisson, CEO at Hamleys of London, said: “We’re really excited to be opening at LDO as it’s a great retail and leisure destination for all the family; with a play park, cinema and now a Hamleys, where we’re looking forward to bringing smiles to the children and families visiting Wembley Park.”

Cowshed, which sells award winning natural bath and body products, will open a new store ahead of Christmas in a 1,390 sq ft unit at LDO. Jayne Demuro, managing director of Soho House Retail, said: “We’re really excited about opening a new Cowshed store at LDO in time for Christmas. LDO has great customer numbers, and the right demographic for our products which makes it a perfect spot for us. We’re sure we will trade well there.”

LDO’s casual dining restaurants provide plenty of choices to relax during a daytime shopping trip or for an exciting evening event. The selection includes Cabana, Las Iguanas, Ping Pong, PizzaExpress, wagamama, Prezzo, Zizzi, TGI Friday’s, Nando’s and handmade burger Co.  With a calendar of events at the Stadium, including several World Cup qualifier matches, plus a host of famous entertainment at The SSE Arena, the hospitality choices are popular with event-goers and regular LDO guests alike.

The Lost Rivers Brewing Co. has signed a lease at LDO to open a 2,650 sq ft bar and kitchen overlooking Wembley Stadium. There, it will serve its own quality craft ales such as The Wallbrook, Neckinger and Silkstream, named after London’s ‘lost rivers’, hence the name. Executive chef Matt Reuther has produced an individual modern British menu to pair with the large selection of quality beers.

LDO’s f&b line-up will be further enhanced with the opening of Sugar Dumplin, a 2,340 sq ft Caribbean BBQ & Bar on two levels, with views over Wembley Park Boulevard and Wembley Stadium.  It features its own on-site rum distillery, candle-lit beach huts, scattered with snug blankets, and Caribbean cuisine.

Susanne Morris, leasing manager for LDO, commented: “LDO has one of the largest outlet catchments in the UK. Over half our customers are in the Acorn Affluent Achievers or Rising Prosperity categories. These latest retail and leisure signings will be welcomed additions for our guests as we head towards Christmas.”