Store Street was ‘On Fire’ for launch evening to Bloomsbury Festival 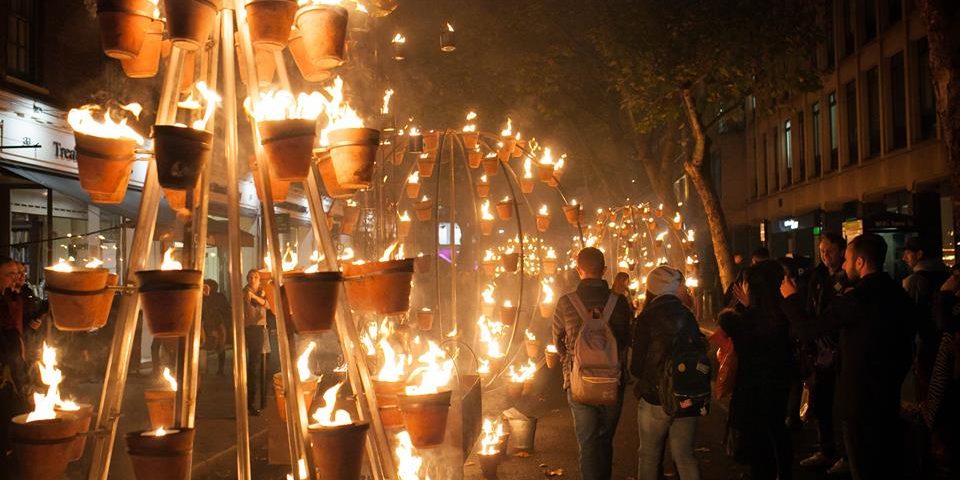 Coverdale Barclay worked with Bloomsbury Festival to host a spectacular evening street party to open this year’s festival weekend on Friday 23rd October. Bloomsbury Festival is an annual creative explosion of performance, arts, music and heritage events held in one of London’s most vibrant cultural quarters.

As the theme for this year’s festival was ‘light’, inspired by UNESCO’s Year of Light and light based technologies, Store Street was artistically re-invented by fire, light and pyrotechnic gurus pa-BOOM. An array of illuminating fire installations lined the street, including a new fire piece designed especially for the event by pa-Boom with inspiration from local charity, Holborn Community Association.

A dance flash mob by Shuffle dance company at The Place in Bloomsbury, marked the start of the evening and each shop, café and restaurant remained open later than usual to host a different art and culture activity. Highlights include harpist Fontane Liang’s performance at Hurford Salvi Carr, bike-powered cinema at Cloud 9 Cycles, the transformation of a ball gown into a piece of art using hair dye and scissors at Decadence Salon, and life drawing workshops at Russell and Chapple that numerous aspiring artists took part in.

Crowds gathered in their droves to watch Martin Piehlmeier, Jack Harris and Various Guises perform mesmerising sets on a fire-lit stage, whilst guests enjoyed cocktails and drinks from Riot bar and the street’s cafés and restaurants.

“We would like to thank everyone who attended the Light Up Store Street event on Friday, we hope guests had as much fun as we did. We wanted to host an evening with equal measures of participation opportunities and awe-inspiring entertainment that fit with this year’s theme. Store Street, with its unique parade of shops and restaurants, was the perfect location to kick-off Bloomsbury Festival 2015 and set the standard for the rest of the fun-filled weekend.”